A Flurry of Fens

A little over a year ago, I decided to treat myself to my first printed copy of an indie pattern for my birthday. I decided on the Fen Dress by Fancy Tiger Crafts, which I purchased through Indie Sew. I had seen it featured in a lot of Instagram posts and loved the relaxed, loose shape of it because I am really lazy when it comes to getting dressed and I want to feel like I am in my pajamas at all times- even when I am trying to look more pulled together by wearing a dress. The first one I made, I used this cute quilting cotton print I got at City Quilter in Manhattan a few months before they had closed. For whatever reason, I was really drawn to the print even though it’s anything but refined and I had just turned 28 when I bought it and should probably have been thinking about dressing more like an adult. As Kurt once said on Glee, “Rachel manages to dress like a toddler and a grandmother at the same time,” and when my sister and I first heard this quote, we felt like it perfectly described the way I dress as well. 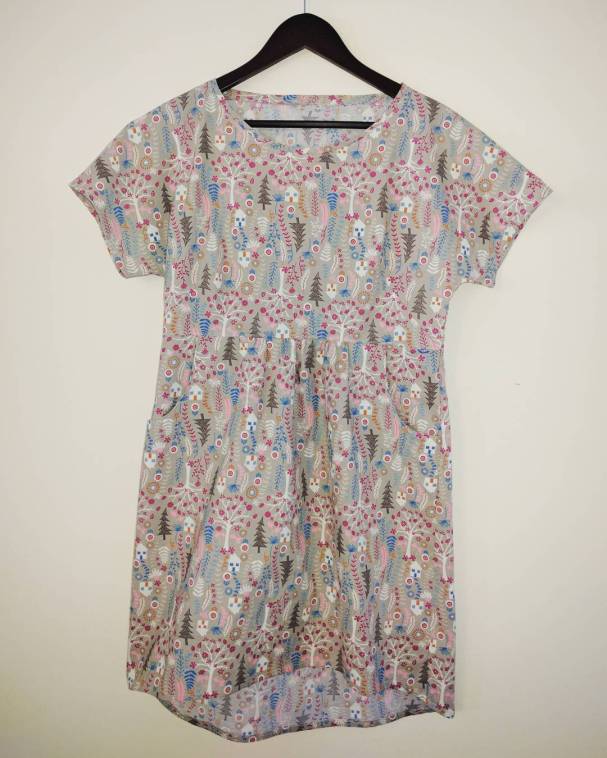 The second Fen dress I made was out of another quilting cotton by Cotton + Steel that I purchased from Craftsy. I probably shouldn’t have made so many dresses using quilting cotton because it doesn’t move very well. Whoops. This one has softened up a bit after being washed a couple of times though. When I made this one, I wanted the skirt to be a little longer because I felt like the front of the skirt on my first one was just a little too short. So I thought I’d lengthen it from the top but I forgot to lengthen the pockets as well! So I had to re-cut them. But now I have longer pockets to put more snacks in. So it was worth it. 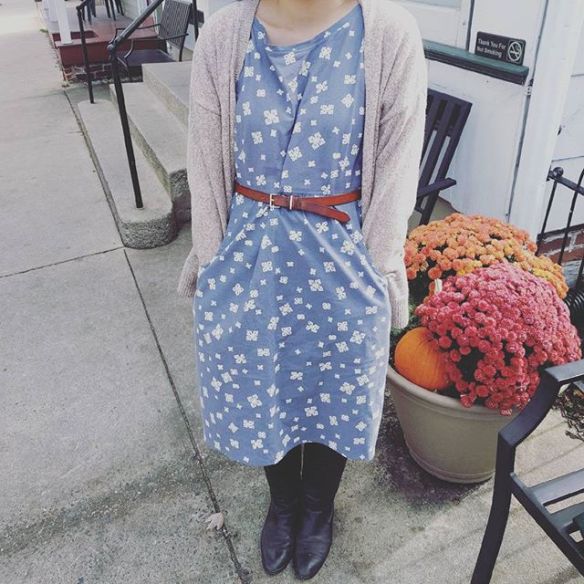 (^ That’s me wearing this dress on our mini-moon. I added swing tack belt loops to the sides so I could wear it with that belt without it sliding around.)

The third Fen dress I made, I used this cotton fabric that I purchased during our mini-moon from The Old Country Store in Pennsylvania. For this one, I thought I’d try to be a little different and add some piping to the pockets. For some reason I really, really wanted to buy some polka dot piping at one point and purchased three different colors from the Etsy shop On Trend Fabrics. So I used the navy blue yardage that I had in my stash. This time, instead of lengthening from the top of the skirt, I added length to the bottom and straightened it out.

Unlike the first two Fens I made, this is a nice lightweight cotton and I love having a homemade memento from our mini-moon.

The most recent Fen dress I made is probably my most favorite. I had bought this Robert Kaufman gingham fabric from fabric.com with another project in mind but once I had washed it and kept looking at it sitting on top of my fabric pile, I decided it would probably make a nice Fen dress instead.

I tried to pattern match the fabric around the pockets, and it is just the tiniest bit off, but not enough to bother me.

I left this one hanging for a while because I just liked the way it looked in the corner of our apartment next to the pom pom wreath I made.

And I was SUPER happy to wear this dress in front of a bunch of old ladders while Kevin and I were out antiquing last July. I don’t want to show my face because my hair looked bad, but just trust me, I’m wearing a BIG smile in this picture.

I just indulged in a lot of fabric sales online during Thanksgiving  weekend and I bought some grey double gauze from Miss Matatabi Fabric and I think it’s already telling me it wants to be a Fen dress as well…Maybe I’ll try the longer sleeve version this time though.