Back in April, I decided I was going to try and make as many Christmas gifts as I could. My husband had been out of work since February and I was already panicking about how expensive gifts usually are because I am a worrier and like to make the worst of things. It was a lot of work and I was nervous giving homemade clothes as gifts, but these projects were a helpful distraction during a stressful time. Also, I made most of the clothes out of knit fabric so that a perfect fit wasn’t as important (I spent a lot of time stalking pictures of my family on Facebook to try to guess what sizes to use for them.) Here is a roundup of the patterns I used and where the fabrics are from:

The very first, and simplest projects, I finished were these turtles for our 6 and 8 year old nieces. I used this free pattern from Purl Soho. The floral fabrics I used for the shells are scraps from old projects and the linen fabric for the head and top of the legs is from JoAnn. The felted wool for the underside is from the Etsy shop Benzie Design. I was relieved to find out that turtles are one of our 6 year old niece’s current favorite animals. My brother-in-law seemed to like these too. I might make one for him with some scraps of Star Wars fabric I have.

This is a Fen Top by Fancy Tiger Crafts for my sister. The flannel fabric is Robert Kaufman purchased from Craftsy. This is the only garment I made out of woven fabric because I have already made a longer sleeved version for my sister and I know it fit her. This was originally going to have longer sleeves as well but I kind of liked the way this one looked with short sleeves after I had started working on it. 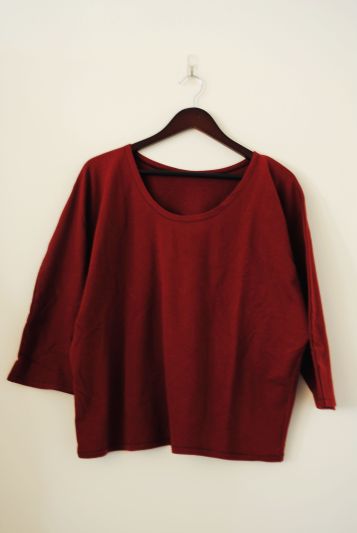 This is another top from Fancy Tiger Crafts for my mother-in-law. It’s a free pattern called the One Hour Top and the french terry knit fabric is from Raspberry Creek Fabrics. It’s an easy pattern that goes together really quickly but the sizing seems really big.

Yes, these are matching shirts. And they were for my brother and sister-in-law. I made the Seamwork Eugene shirt, leaving out the placket, for my brother first using this white and grey heathered french terry knit from Koshtex and scrap grey ribbing for the bands and pocket. When I was done, I realized I had enough leftover to make the cropped version of the Linden Sweatshirt from Grainline Studio along with some leftover coral french terry knit fabric, also from Koshtex. I wasn’t sure who I should make this for at first, but my sister-in-law is probably the only one in our family who would have any interest in matching my brother. 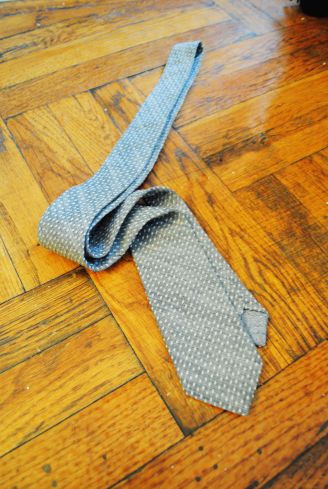 This tie from Sew Over it London made out of some scrap Robert Kaufman chambray was for my dad. We wrapped this up along with some lottery tickets because I can’t let a gift-giving occasion go by without giving my dad some hope that he’ll become a millionaire. The grey top is for my mom and I used the Hemlock Tee pattern by Grainline Studio, which is free if you sign up for their newsletter. The knit fabric is from Fabric Warehouse in Rahway, NJ.

This is a Ryan Top by Whitney Deal for my sister-in-law. I had some of that white knit fabric left from another project and thought it was so pretty and had enough to get the yokes out of it for this top. The purple french terry is from fabric.com. The pattern calls for woven fabric, but the first one I made was hard to pull over my head so I decided to try making it out of a knit this time. 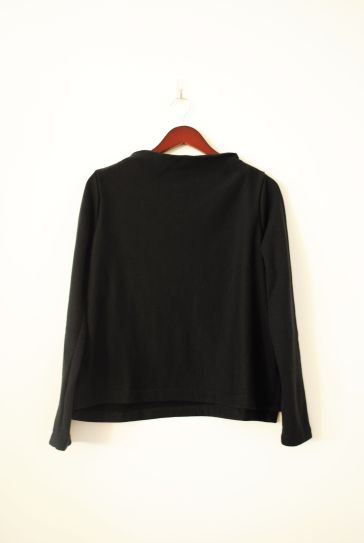 This is the last project I made. After my sister saw me wearing the first Toaster Sweater 2 by Sew House 7 I made, she said she liked. So I asked her if she wanted one and she said yes. I also asked her what color she wanted and she said black. So here is my sister’s black Toaster Sweater 2. After Christmas, she texted me to say she wore it work and then to bed for three nights straight because it was so comfy. And I have to agree. I love wearing mine also and I think this pattern is one of my favorites ever. Maybe I’ll just make one for everyone next Christmas because they’re so easy to make and they are toasty just like the name says.

Here are all the gifts wrapped up and ready to go. That floral tote bag is also a homemade gift for my mother-in-law holding all of the things we got for her inside. Luckily, my husband started a new job in November so we bought some gifts for everyone just in case they hated the homemade stuff. Halfway through, I remembered sewing doesn’t really save that much money because patterns and quality fabric are kind of expensive. But it was nice being able to give everyone something other than a bunch of stuff we ordered from Amazon at the last minute and supporting small businesses like these pattern designers and fabric shops instead. So who knows if I’ll make everyone homemade gifts again next year. But at least I can say I did it once.