Christmas is always my busiest time of year. While I enjoy the holidays, my work schedule always makes it hard to fit in celebrating. So I like to spend little bits and pieces throughout the year making gifts for my family as my own way of enjoying Christmas all throughout the year. Here is a summary of what they all received this year… 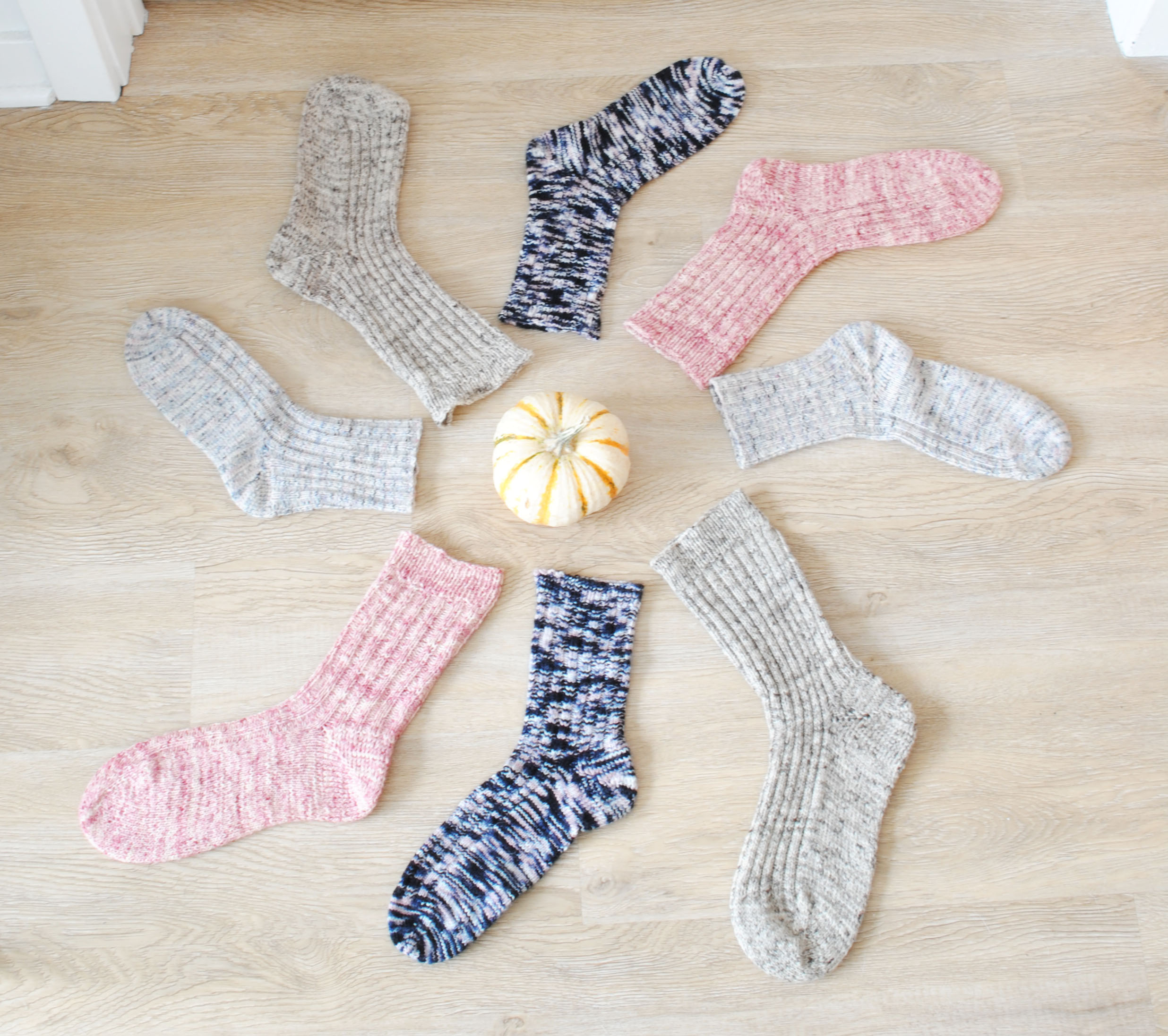 This was the year of the sock. Back in August, Fancy Tiger Crafts announced a knit-along for a sock pattern called the Basecamp Socks. I had always wanted to knit socks but was always too afraid to try because I heard they were complicated. Someone in the comments section of their Instagram post asked if it was a good pattern for beginners and they said yes. So I decided to dive right in because I thought a knit-along would be a good motivator. Though it was a little tricky at first I am now addicted to knitting socks and most of my family members received socks as gifts this year. The red pair went to my mom. The beige pair went to my dad. And I gave the purple pair to my sister-in-law as part of my baby shower gift.

I also knit my mom this Pre-Wrapped Wrap by Purl Soho out of Lily Sugar N’ Cream yarn. I like the idea of wearing this over dresses at special events when it’s chilly out so I may have to make one for myself at some point. 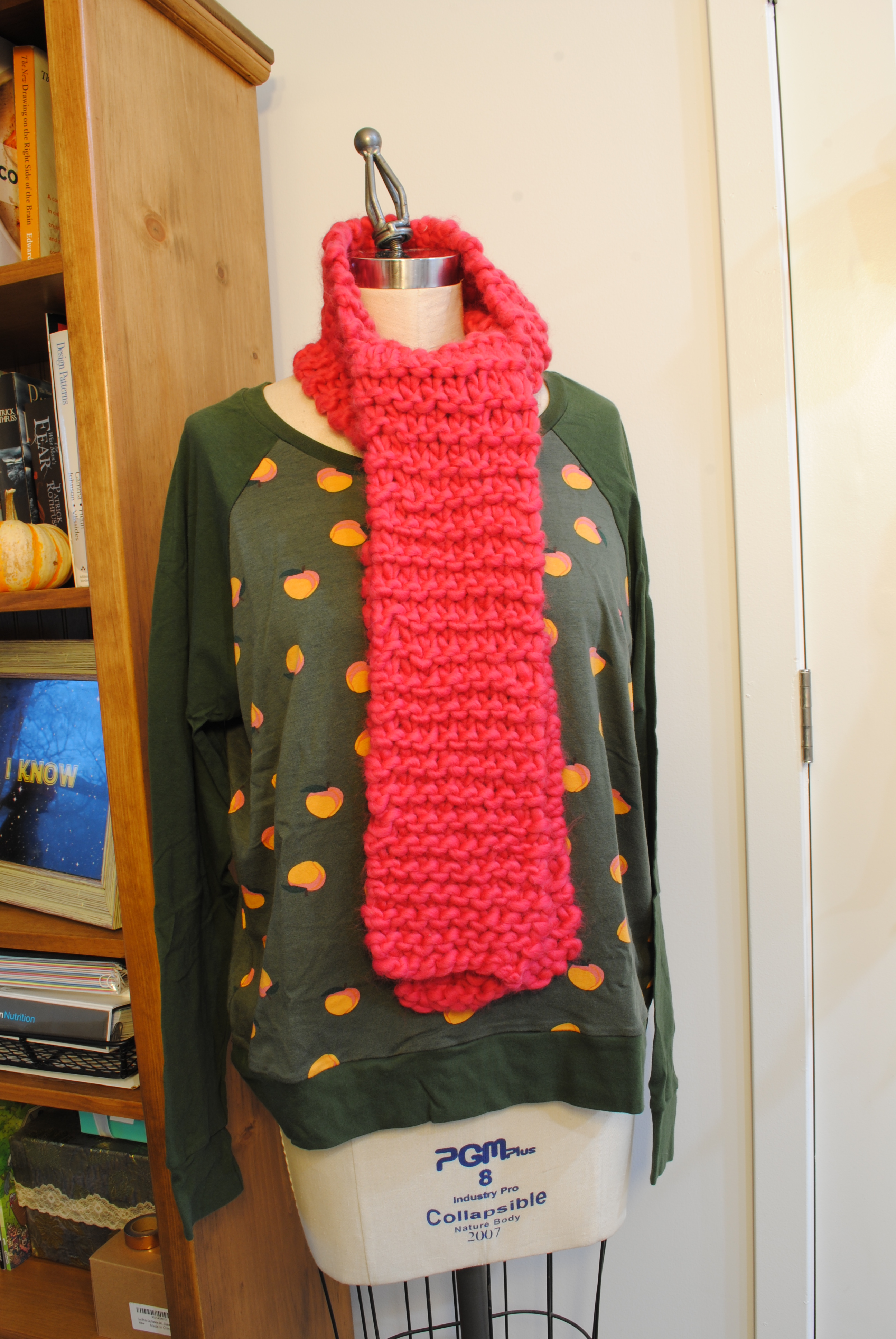 I made a Linden Sweatshirt out of some of this peach print jersey I had leftover at the beginning of the year and set it aside for my sister-in-law. I also made her the Lil’ Foxy Roxy scarf in Lipstick Red by Wool and the Gang. It was a much brighter color than I had anticipated, more like a hot pink than red, but I still think it’s pretty.

My sister received an Oversized Infinity Scarf designed by Krysten Ritter for We Are Knitters and (surprise, surprise) a pair of Basecamp Socks in some yarn I got from my local knitting shop, Yarnia. 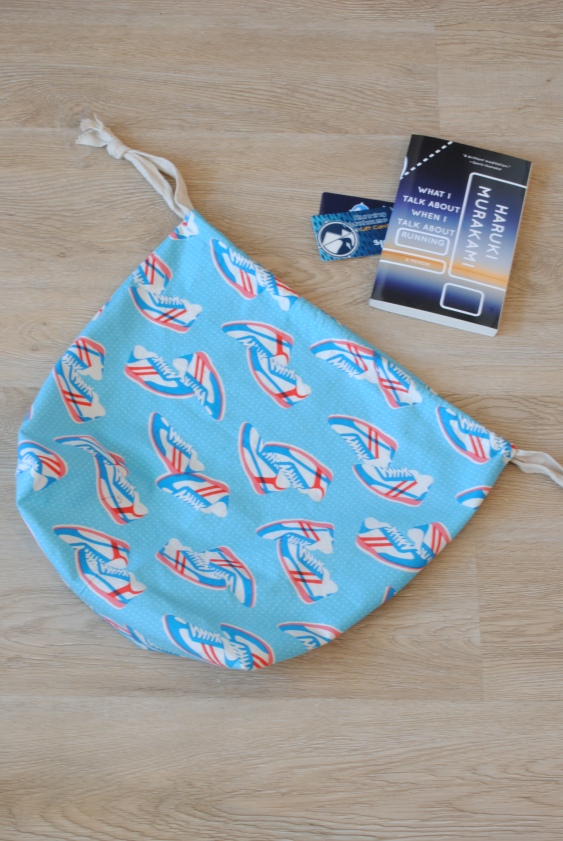 My brother is an avid runner. He’s run the NY Marathon TWICE now and got his name in the NY Times both times afterwards! So I made him this drawstring bag using a tutorial from Purl Soho so that he could pack his shoes in it when he travels for races and not get his clothes dirty because I’m a germophobe and I think about that kind of stuff. I also included a gift card to Running Warehouse and a booked entitled “What I Talk About When I Talk About Running” to keep the whole gift running themed. I’ve never actually read that book myself so fingers crossed it’s good! You can read about his running adventures at Rich Moy Runs. 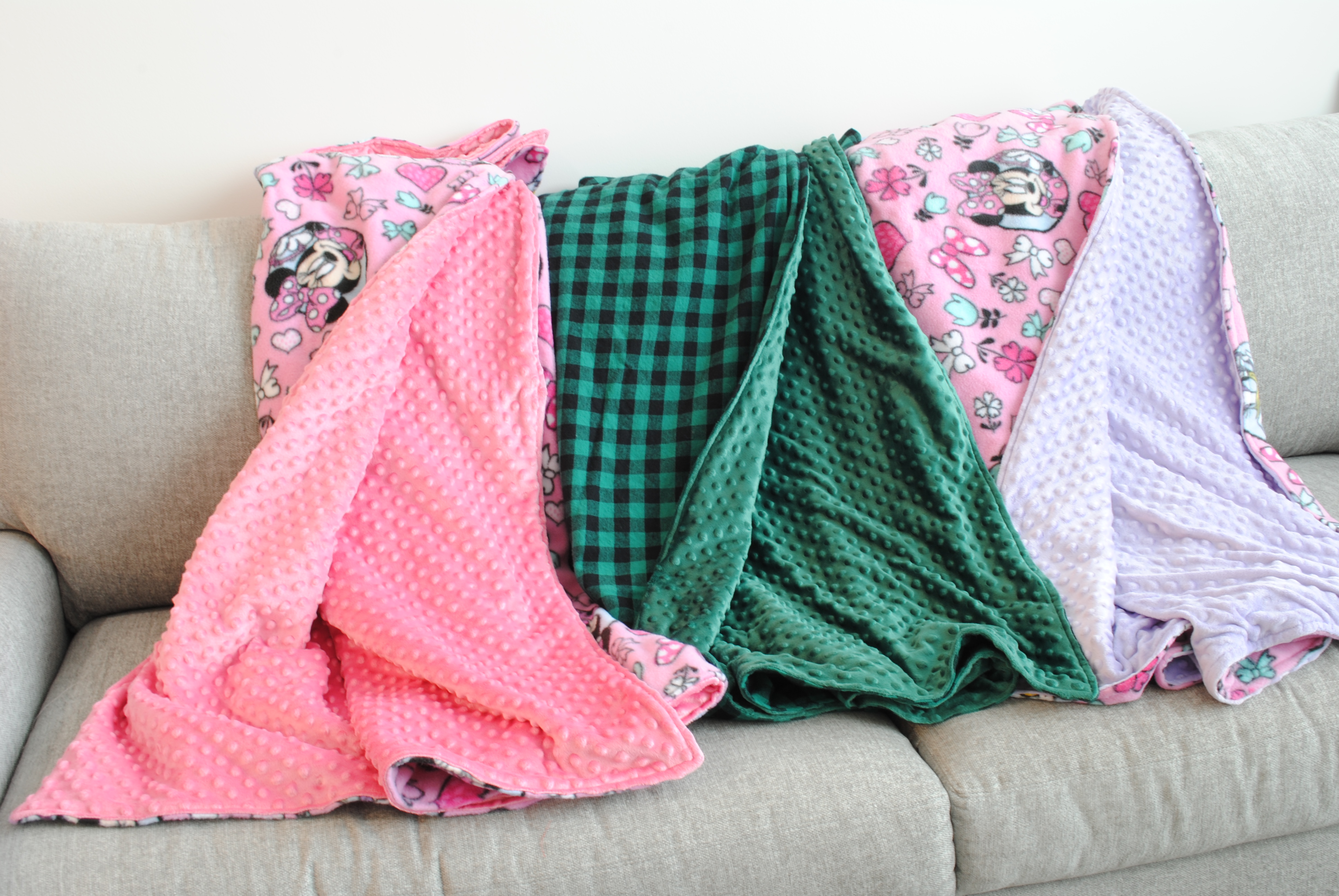 For my nieces and nephew, I made them these blankets using all fabric from JoAnn, except the green plaid, which I had to order from Amazon at the last minute because the fabric I originally purchased wasn’t wide enough. *Shaking My Head.* I also thought the Minnie and Daisy fabric was flannel but it turned out to be fleece so it was much thicker to sew through than I was intending it to be but I guess that’s what I get for ordering things at 6:00 in the morning and not reading product descriptions carefully! Oh well. They’ll just be extra warm this winter. 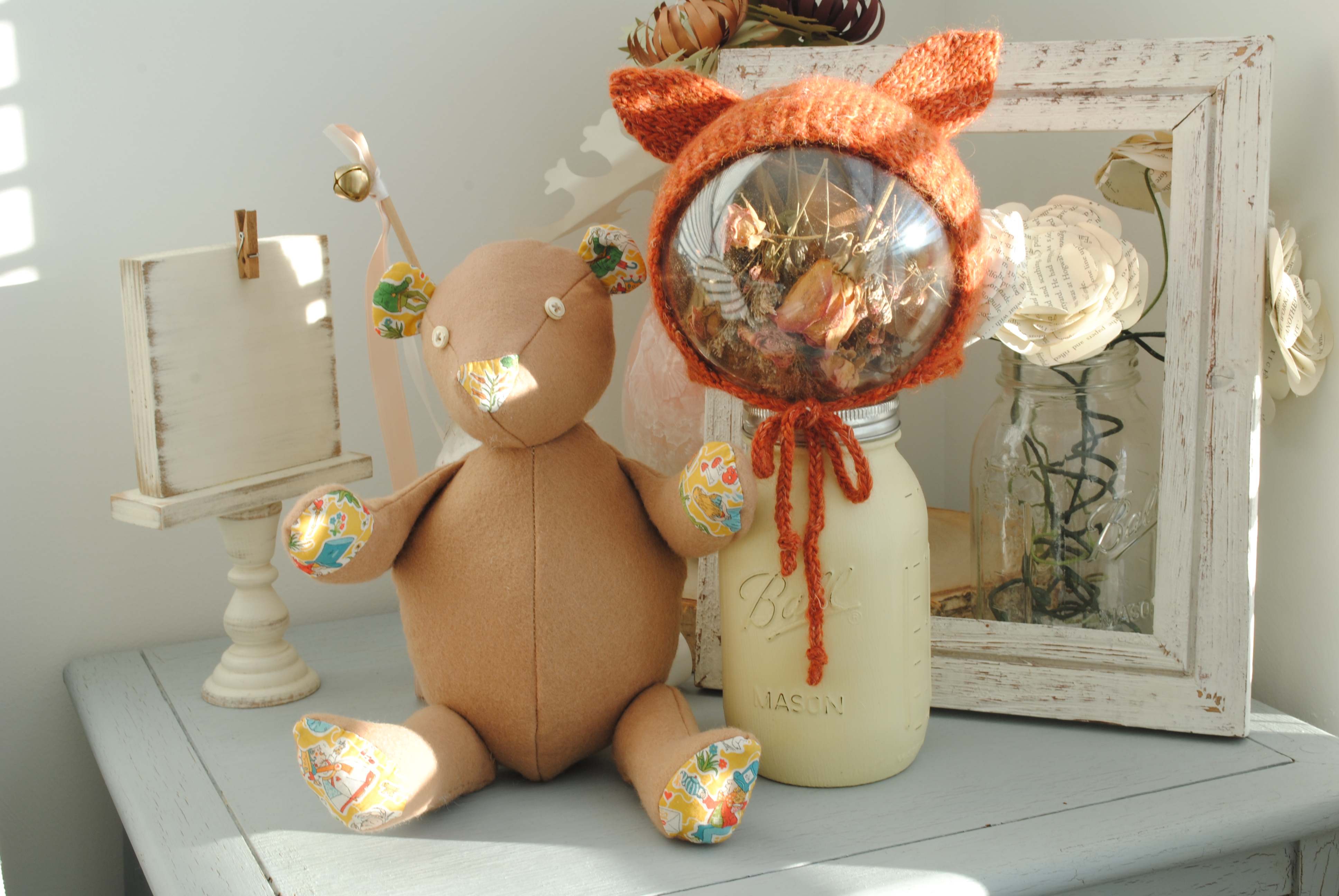 I made my newest nephew this teddy bear using a pattern from Purl Soho and a Wiksten Animal Bonnet out of yarn that is also from Purl Soho. I CANNOT WAIT to see the little guy wear that hat. I’m hoping one day he’ll look at all the pictures and say to us, “You all really took the fox theme too far.” 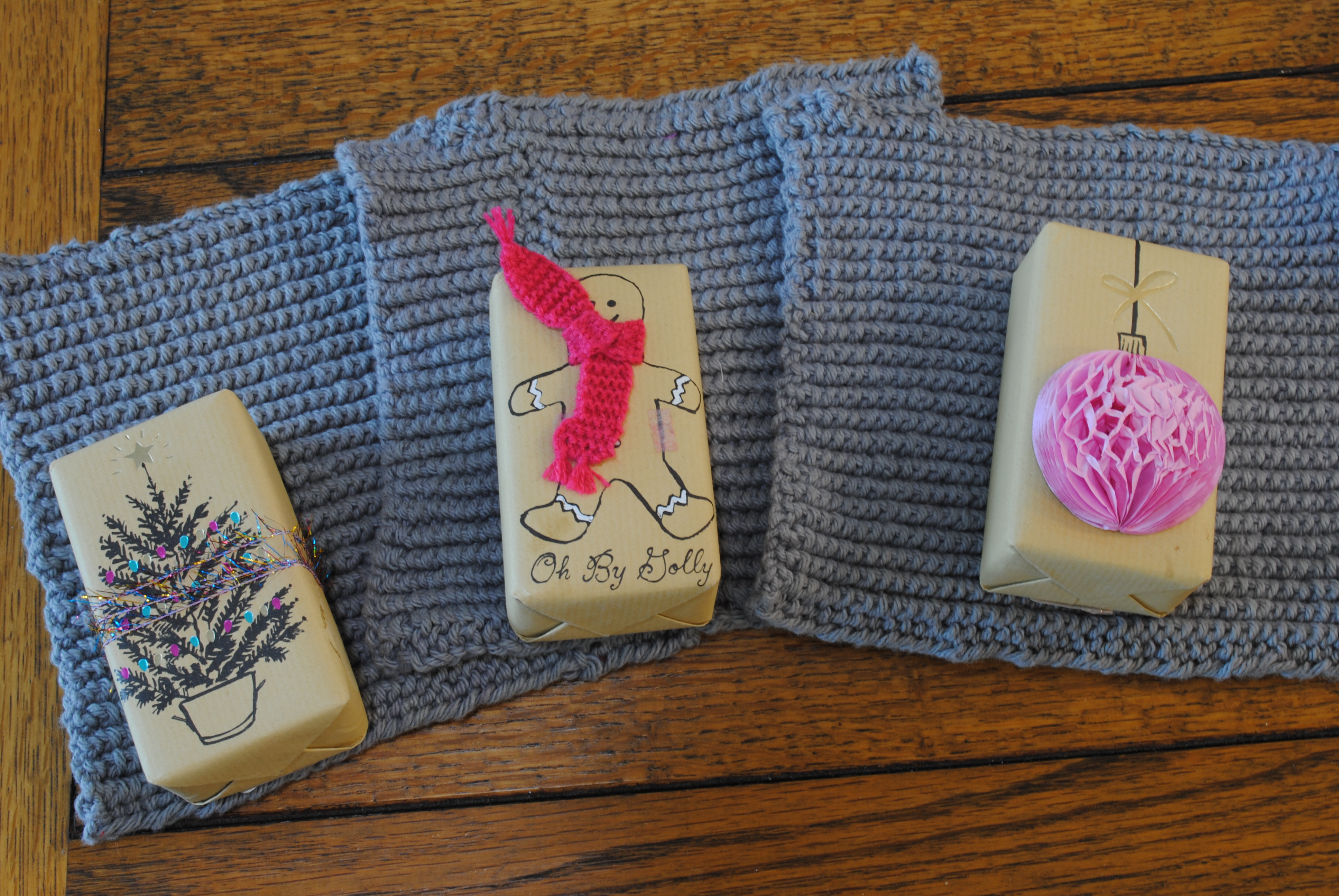 My aunts and uncles all received these wash cloths I made using a pattern from Purl Soho out of Lily Sugar N’ Cream yarn and these adorable soaps from Anthropologie.

Lastly, I wrapped my mom’s and sister-in-law’s gifts in these reusable drawstring bags I made and I hope they’ll reuse them again next year to cut down on using wrapping paper. I think they look so cute and once the bags are done they actually make wrapping things so much easier. (You should have seen Kevin trying to wrap an oddly packaged toy kitten for our niece!)

Phew! Summing it all up here, it doesn’t seem like that much but I have to remind myself that this all took me almost a year to plan and execute. Homemade gifts are a lot of work but I find them so much more satisfying than buying a bunch of stuff from big box stores. I probably won’t be able to keep this kind of homemade gift giving up forever, but it’ll be fun to do while I can.

…Now what to make for next year….?