Being Aware of Fake Accounts on Social Media- Sewcialists Edition

I also hate Instagram. I hate that people become so preoccupied with gaining followers they’ll go so far as to pay a marketing company to provide them with fake ones so they look more popular or important. I hate that these companies are trying to rip off people’s identities in an attempt to create realistic looking followers to sell to their customers. I hate that it’s so hard to tell when we come across one of these fake accounts while scrolling through our favorite hashtags without digging much deeper.

Over the past few days I’ve found a lot of suspicious looking accounts on Instgram through sewing related hashtags. What initially tipped me off was, while scrolling through the #sewcialists hashtag, I clicked on a few profiles and noticed they didn’t have a lot of followers. I liked their photos (each account only having one or two) and decided to follow them. By the third profile this happened with, I noticed one of the posts was a #BestNine2018 photo with nine pictures of different handmade garments. I thought this was weird since the profile only had three posts altogether. That’s when I started to dig deeper.

Luckily, the sewing community has a lot of hashtags that aren’t inundated with photos (like hashtags for specific patterns), so the original post is pretty easy to locate. To track back to the original user’s photo, I’ll start by clicking on the hashtag that I think will have the least amount of photos. This gives me a lot less to weed through as looking for an old post may be like trying to find a needle in a haystack sometimes.

Here are some examples of usernames for fake accounts I’ve found over the past few days:

The above photos are from a non-sewing related account. I don’t remember looking at it but I came across it in my search history while trying to collect a list of fake usernames I had discovered. I believe it was probably impersonating a sewing related account at first but then switched over to an equestrian themed one after it had been found out. It took me a while to track down where the original photos came from, but copying and pasting the bio into Google Search led me right to it. The photo on the left displays the real account and the photo on the right is the fake account.
More examples of stolen profiles (names and bios have been blocked out for security): 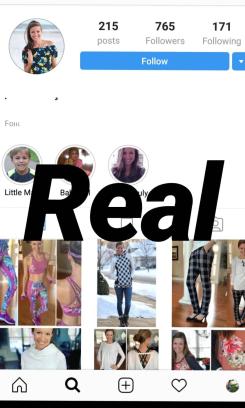 Reasons You Probably Don’t Want Someone Impersonating You On Social Media:

So, I beg of you, please be more aware when liking photos on Instagram and report something if you see it. As social media and the sewing community become more involved, we can form a sort of neighborhood watch type of accountability program to protect each other. I don’t think we should let this get in the way of our enjoyment of using Instagram to be inspired by and discover other makers, but this is something we should all be aware of while we’re scrolling through our feeds or hashtags.