When Allie Olson of Indie Sew first announced this year’s Shirt Month back towards the end of January, I was excited to finally be pushed to make the Kalle Shirt. I had bought the pattern during Indie Sew’s Black Friday Sale two years ago but it just sat in a basket because I was too afraid to cut it out and also too lazy to trace it. Since January was also the first time I had found myself unemployed in over two years, it seemed like the perfect challenge to keep me distracted while I half-heartedly looked for new work and recovered from a stressful few months at the same time. I thought it was pretty humorous when Allie introduced the new fabrics she was stocking for shirt month the next day and one of them was pretty much identical to the fabric from my stash that I had planned on using. The only difference was that my fabric has that extra thin stripe running down and across it.

I traced out the size 6 and it took me so long. I usually don’t trace patterns and just cut into them because I just don’t want to deal with all that extra work. Sewing for other people for a living, I just want to get right to the fun stuff when it comes to myself. In the end, I’m glad I did trace it since now my original Kalle pattern is still intact and I will be able to make other sizes from it in the future. I also took the risk of cutting the pieces out of my fabric as I needed them because I just hate plaid matching so much and wanted to get straight to sewing, especially after spending so much time tracing the pattern. I was pretty sure I had enough fabric though so I wasn’t too worried.

This was my first time doing the burrito method. The first time, I made the silly mistake of not attaching the front pieces so I had just enclosed the shoulder seams of the outer and inner back yokes. When I was done, I was confused as to how the front pieces get attached. So I referenced the sew along on Closet Case Patterns‘ website, said “duh!” to myself and then got it right on the next try.

After that, it was on to the side seams! I french seamed them because I like my homemade garments to look as neat as possible on the inside when I have the time and motivation to do so.

I didn’t realize there was a front and back piece to the sleeve cuffs and only traced and cut out the back cuff piece so it was huge! And I didn’t realize why until I was done. So I kept taking it in until it fit. So it’s a little awkward around there but I think it still looks fine. I also cut the cuffs out on the bias because, again, I hate pattern matching.

And as much as I hate pattern matching, I love that inverted back pleat!

I actually finished a second Kalle Shirt while I waited for some wooden buttons from Arrow Mountain to finish my first one. This one went so much quicker and smoother since I had just gone through the trials and errors of making it the first time. I lengthened both of them by 3″ and wish I had lengthened them just a little more since I don’t like my shirts to be too short. The original cropped length the pattern comes as DEFINITELY would have been too short for me and I am SHORT! 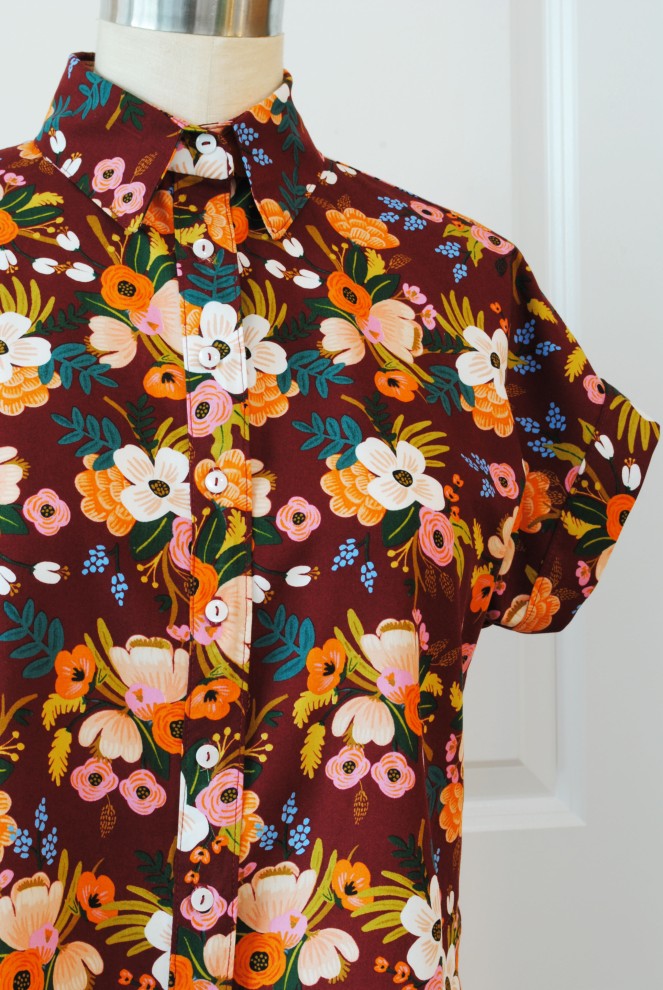 I love this floral Rifle Paper Co. fabric so much. It feels so luxurious when I wear this shirt. I know so many places carry Rifle Paper Co. fabrics but I got mine from Sew Jersey because I like to support small NJ businesses as much as I can, it being my home state and all. The little buttons are from Yarnia, my favorite local yarn store.

I wore my floral Kalle shirt to the bookstore and I think it goes pretty well with the wood of the shelves I’m standing in front of.

Here I am wearing my plaid Kalle shirt. I had been saving it to wear for the first time to my friend The Rambling Rosie‘s Easter themed get together. I even attempted dyeing an Easter egg to match my shirt. How’d I do?