Last year I took part in the Restyling Exchange challenge hosted by @amynicolestudio and @pilar_bear and I had so much fun doing it. But this year I was extra excited when they announced the option of choosing our own partners. I obviously chose my friend, Erin, of Poetic Memory Sewing, who I’ve known since college.

I actually sent her something I made during our freshman year in college during one of my sewing classes but only wore once for the fashion show that served as our final exam and then never again. I chose the style because I knew those intricate pleats would get me an A if I executed them well even if the design didn’t exactly fit my style. I believe the pattern was from Vogue but I don’t remember the pattern number since it was so darn long ago. 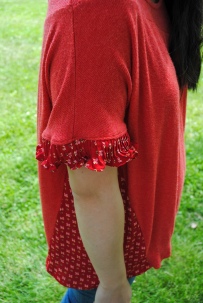 I just love how she incorporated the pleats and was able to keep them completely intact. I also love that she used the sleeves to add godets to the side seams. This top is so comfortable and something I will get so much more wear out of now. 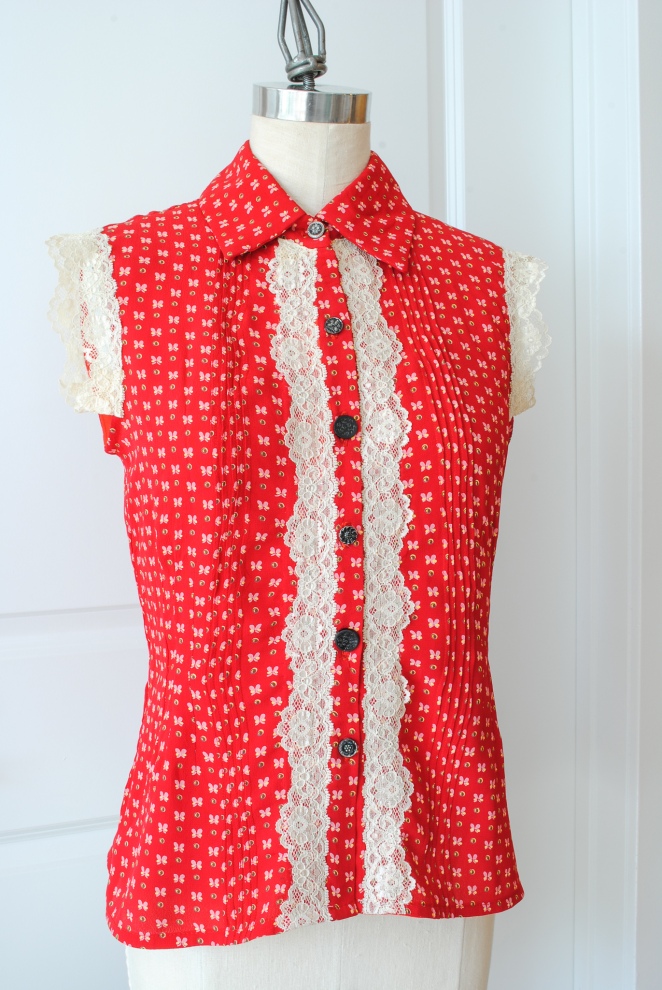 She even saved the main portion of the blouse for me because she thought it might still be wearable. There were some holes where she trimmed the pleating off but this was easily remedied with some patches that I covered up with lace trim. She felt bad about the holes she cut into the blouse but I think it was a happy accident because I probably wouldn’t have added the trim otherwise. I was also glad to finally find the perfect project to use these black antique buttons I got at a flea market on. They’re so much prettier than the plain red buttons I originally used. So this is my bonus refashion!

Now onto what I made for Erin…

Erin sent me this Liberty of London x J. Crew blouse that she had thrifted. I really wanted to incorporate some one yard off-cuts  I had bought during one of Fab Scrap‘s Instagram flash sales since they were hosting their own refashioning challenge this month. 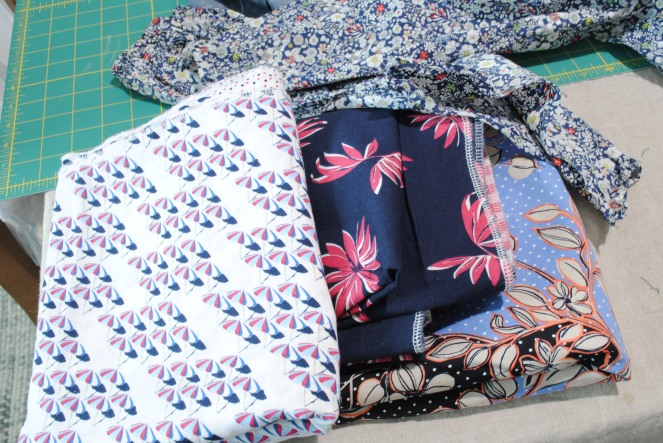 These were the three fabrics I had to choose from. It was a difficult choice because I was worried they all might be too much mixed with the Liberty of London fabric. So I played around with it until I finally decided on the polka dot/floral mixed print, which is what drove me to buy this pack to begin with. I just thought it was so pretty! 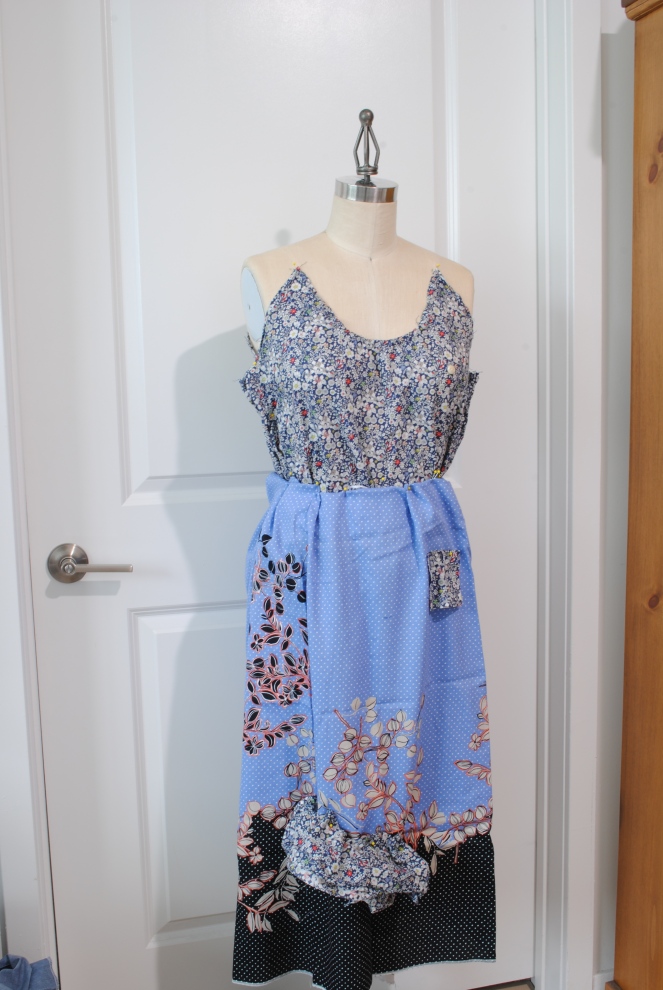 Having a dress form this year helped so much. It allowed me to test out my fabric choices before I settled on one and it was especially crucial in draping and fitting my garment. 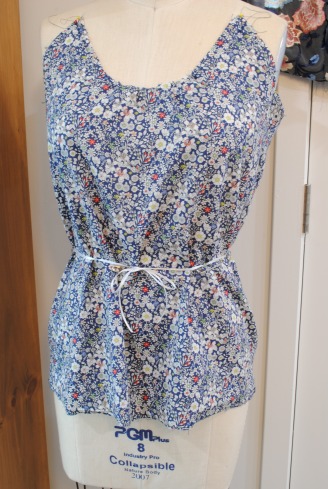 I asked Erin for her nape to waist measurement and she said it was 16″. However, this seemed extremely long so I just used my dress form as a guide. I tied a ribbon around the blouse at the waist and marked it with safety pins to get my cut line. The straps/neck binding were done out of a Cotton + Steel remnant I had in my stash. 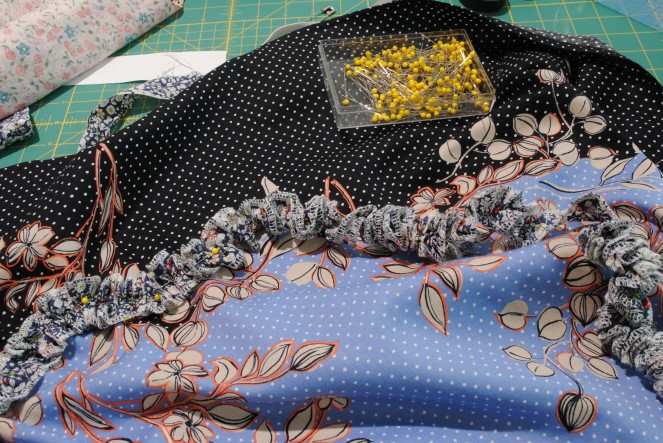 Then I used the extra fabric from the sleeves and what I cut off the bottom of the blouse and cut it all into 1″ strips to add a ruffle along the part of the skirt where it changes from purple to black. I thought this would help the top and the bottom look a little less disjointed. 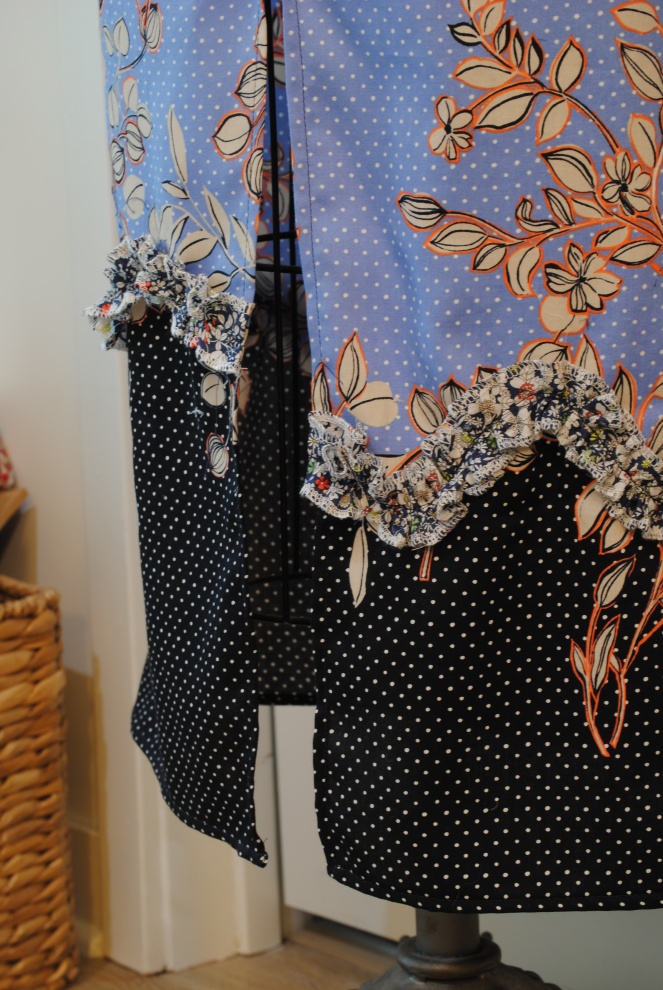 I didn’t need nearly as many ruffles as I thought but since I had already cut all those strips and sewn them together, I thought I’d cut them into three even strips and turn them into a braided rag bowl. You can see how much was leftover in the picture to the right. Can you believe I was actually nervous I wouldn’t have enough for the ruffles in the beginning?!

And this is the finished look!