I’ve never understood the point of short sleeved sweaters. Weren’t sweaters supposed to keep you warm? But then I came across Jacqueline Cieslak’s Rift Tee pattern and my life changed. I saw the sneak peaks on Instagram and I knew I had to make it. I had just made her Ursa Sweater and really enjoyed it. It had given me a little bit of difficulty at first because I didn’t understand the half brioche stitch but overall it was such an addicting project I couldn’t put it down. In comparison, the Rift Tee went much smoother for me and was a really easy project to complete fairly quickly. It contained a decent amount of stockinette stitching that kept me occupied on my commute to work for a few days, which is always nice. And knitting in the round is especially good for commute knitting. This sweater also doesn’t take much yarn which my wallet always appreciates. I bought two skeins of Amano Awa yarn in 1108- Cochineal and still had enough left over afterwards to make my nephew a hat. Whoo!

Here I have it styled over a Metamorphic Dress by Sew Liberated to show it off. I actually entered this into Mockingbird Fiber Co’s Sweater Knit Along and won! It was a pretty general knit along, with entrants able to make any sweater of their choice in any yarn just as long as it was a finished object. I received my prize in the mail and it is the most gorgeous yarn! 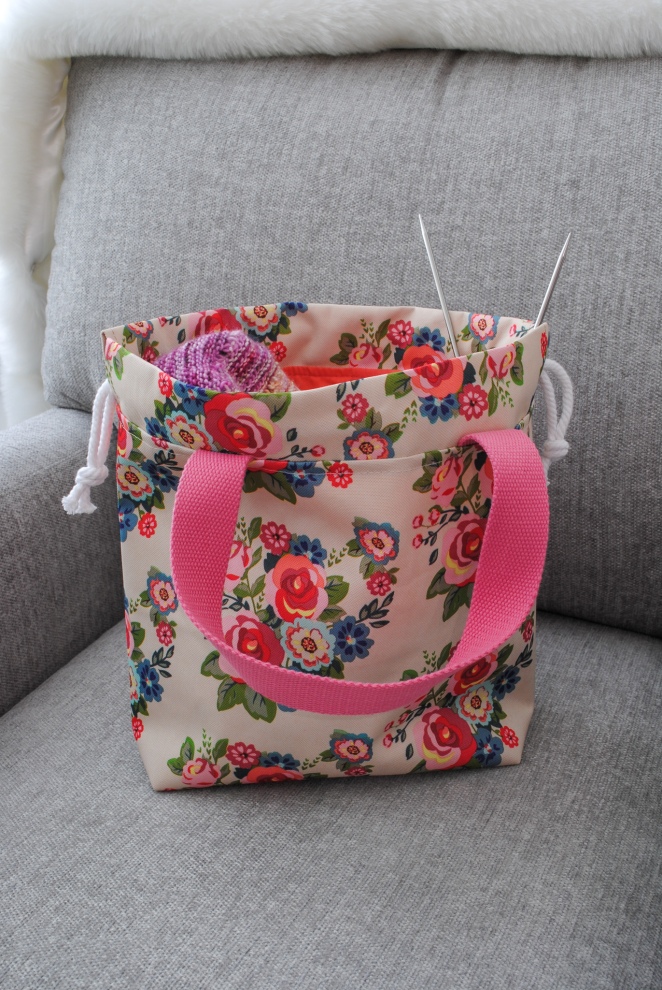 I also recently made a new project bag using this canvas fabric from Fabrics Wholesale Direct and the best part about it is that it’s waterproof! So I know whatever project I store in here will be safe.

I carried it around for the first time paired with my Rift Tee and Ogden Cami Dress. It was the perfect outfit to roam around the NJ Sheep and Fiber Festival in during a warm, late summer’s day. Just a side note though, I thought I’d save myself the trouble of carrying my purse by throwing my wallet in my project bag and the shawl I had in there got snagged on it when I went to pay for some of the yarn I bought. I was so frustrated with myself but thankfully was able to fix the snag. Never again will I put my wallet in my project bag though. Anyways, I now understand the point of short sleeved sweaters!

The tutorial can be found here and the free pattern can be downloaded below:

One thought on “My Rift Tee Plus Knitting Project Bag Tutorial with Free Pattern!”